Joseph, like his biblical namesake, is a colourful character. He works in film and television and originates from Los Angeles. He, like many of our students came to us after a recommendation from a fellow student at Pardes (a yeshiva for students of all denominations and backgrounds based in Jerusalem). We really enjoy when students from Pardes come to study with us because they are always eager to learn and grapple with the Hebrew language just as they grapple with biblical texts. And Joseph did just that.

Joseph had a specific desire to be able to speak colloquial Hebrew and to be able to socialize in a Hebrew environment. His classes were very active and laughter was often heard emanating from his classroom. That said, Anis his teacher worked hard to stick to the matter in hand and along with slang and “street language” there was a strong focus on giving Joseph the tools to understand Hebrew grammar and sentence structure. In keeping with Joseph’s profession, as Joseph learnt more and more Hebrew his teacher was able to integrate watching Israeli television as a way of increasing his ability to listen to fast spoken Hebrew.

Now Joseph is planning on filming his own documentary about life here in Israel and has even promised Ulpan Aviv a starring role! 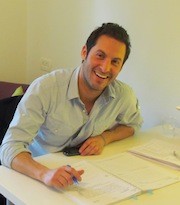