Michael Aharon Gestetner, or Ari as he is known in Israel, was born in Australia and lived in Sydney until very recently. In 2012 Ari decided that it was the right time for him to make the big move to Israel, and alongside his mother, he made aliyah, saying goodbye to two of his brothers in Australia. Ari has one brother who lives in Jerusalem with his wife and nine children, ensuring that Ari received a warm welcome when he arrived in Israel.

After the initial buzz of making aliyah, Ari began to settle down in Jerusalem, searching for an apartment, a new job and getting organized with all the aliyah bureaucracy. In order to transfer his drivers license he had to take the Israeli driving test, which to his relief, he managed to pass, even though he had to drive on the opposite side of the road! In Australia Ari used to work for the internationally renowned company IBM, in computer technology. After working on his Hebrew and settling in to the daily Israel life, Ari is currently looking for work in the high-tech field, and is also interested in becoming more involved in politics and the daily life and integration of new immigrants in Israel.

Soon after his aliyah, Ari arrived at Ulpan Aviv to begin his intensive Hebrew classes. With a background of Hebrew from school and from previous trips to Israel, Ari wanted to focus on enriching his vocabulary and enhancing the flow of his Hebrew speaking. During his two courses at Ulpan Aviv, he learned how to select the correct word, the various applications of the Hebrew root words, and how to express and vocalize his opinion on various important topics, such as Israeli political, social and economic factors. He learned through several methods, including watching Israeli TV shows to enhance his listening skills, reading advanced texts and articles, and practicing writing professional job related emails in Hebrew to help him in his ensuing job applications.  Ari said that learning Hebrew at Ulpan Aviv was overall “a great experience” and that it was “challenging, but in a good way”. At the end of his course, Ari said, “I am very happy with the variety of topics and material used. My teacher helped me realize my weak points in Hebrew, and to understand what is important in Hebrew”.

Over the period of his two courses, Ari progressed rapidly, learning new vocabulary and developing the ability to converse more freely in Hebrew and to grasp the patterns of the Hebrew roots and their multiple uses. From the moment Ari walked into Ulpan Aviv, he brought with him a positive and inspiring ambiance, full of energy and a willingness to learn. We all enjoyed our daily chats with Ari, hearing the latest news in his Aliyah story and laughing with him about the challenges of living in Israel and learning Hebrew. We miss his presence in the ulpan and we all wish Ari the best of luck with his future in Israel. 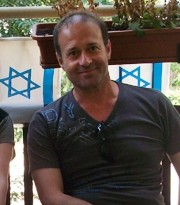