James is a citizen of the United States, who has been volunteering in Israel for 14 years in various different frameworks. These days he volunteers in an institute for the disabled in San Simon, Jerusalem. James came to Israel with his community from Chicago, with a strong desire to change his life path, and to live a life of giving and donating to others. The volunteer visa that he was initially given in Israel was for a very limited time. This time was extended beyond expectations, as each year he requested to extend his stay in Israel, so that he could continue to volunteer here.

James tries to keep a steady and healthy daily routine, starting early in the morning with a workout in the gym, drinking a double espresso in Café Hillel in town, Hebrew class at Ulpan Aviv, and straight from there to volunteer in the institute until the late hours of the night. His job in the institute is to watch over the residents, to serve them meals and generally to take care of their needs. This job doesn’t have defined hours, and James loyally completes his tasks, as he is motivated by his desire to live a life of giving.  Despite his busy daily schedule, he does not give up on doing his Hebrew homework at the end of the day, even until the late hours of the night. James has a strong motivation to learn and progress, something that is not found in every student. His desire to acquire the Hebrew language stems from his wish to integrate into Israeli life, and without a language barrier, he believes that he will be able to get to know and help many people around him and to live a full life in Israel.

As one who has lived in Israel for 14 years, James came to his Hebrew classes with prior knowledge, partly from hearing and partly from teaching himself Hebrew from books; he taught himself to read and write in Hebrew and a few of the basic language rules. Even so, he was given the level of Alef+. During his classes, there were words that he learned, that he subsequently remembered he had already heard in the past, in a different context. When learning, James is a deep and profound student, who always wants to know and understand more, and tries his utmost to not lose or forget any information.  When asked a question it is always important to him to excel and to give the answer that is most original (so that it isn’t boring) and correct in Hebrew. The main challenge in his learning is the lack of time to practice and to digest the material, because of his busy day, but James also manages to deal with this well.  Since James has lived in Israel, he knows and hears words in Hebrew; however he always found it difficult to form sentences from these words. His main accomplishment today is that he can now connect full sentences, and he is able to converse successfully in Hebrew.

We were blessed to have a student like James, with his a good nature, and the strong and special way of life that he has chosen is an inspiration to us all. James, we wish you success in your continuing journey! 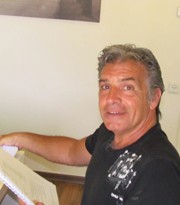